Kris Lees has capped off a terrific Saturday at Randwick, cheering on three-year old Miss Fabulass to Group 2 victory in the $200,000 Tea Rose Stakes (1400m).

After Lees trained Smart Melody won the listed $120,000 D’Antibes Stakes at Flemington earlier in the day, the $9.60 about Miss Fabulass with Ladbrokes always seemed over the odds. 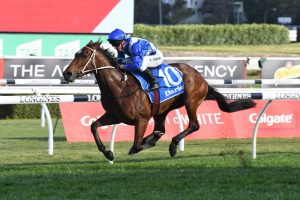 Known for her devastating turn of foot, the filly out of three-time Group 1 winner Samantha Miss found a small gap late in the race, which jockey Kerrin McEvoy took full advantage of after missing an opportunity earlier down the straight.

The plan from the stable was to ride Miss Fabulass quietly on Saturday, which seemed to work wonders.

“She’s still learning her trade, once I asked her she was there and picked up really well, went through the gaps quite soft in the end and showed a good turn of foot.”

History doesn’t lie, the winner of the Tea Rose has gone on to win the Group 1 $500,000 Flight Stakes (1600m) on 11 separate occasions. Miss Fabulass has now firmed into the $3.50 ahead of the September 29 race with Ladbrokes, but more importantly has the chance to repeat what her mother so famously accomplished.

A year before retirement, Samantha Miss won the Flight Stakes in 2008 a fortnight after winning the Tea Rose. When asked about Miss Fabulass’ chance at repeating her mothers success, Lees seemed to like her chances.

“I’d like to , that’s been her aim all year really, that’s the race we’re targeting. She’s got the brilliance of her mum, she just hasn’t got the race sense yet, but it’s coming” Lees said following Saturday’s win.

“I’d say she’d go Flight, yeah. If we can just get her to switch off she’s going to be really hard to beat in that race.”

Aside from an electric turn of foot, Miss Fabulass continues to improve with each prep, and the step up to 1400m really seemed to suit.

Of course, it also helps when your star filly has some handy genetics.

“Very young and got to improve, and I dare to say she’s going to be even better next prep.”