The money came late for Lean Mean Machine, and punters walked away happy as the $15 roughie saluted in emphatic fashion during Saturday’s Run to The Rose (1200m) at Rosehill.

With all eyes on Jonker and the ever-speedy Graff down the straight, Chris Waller’s three-year old exploded between the two, pinching a last-second victory at the line to record an impressive first up victory. 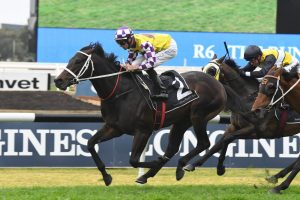 With the focus firmly on next fortnight’s Golden Rose (1400m) favourite Graff, Lean Mean Machine made full-use of his mid-field draw, sitting two off the speed to show real guts and determination in the final furlong of the race.

For the son of Zoustar, it was an encouraging run as the Golden Rose second-elect has now firmed into $8.00 ahead of the race on September 22.

“He’s a very good horse, as we saw with his dad Zoustar he came back as a three-year old and just went to a whole new level, and it looks like this boy has done the same” trainer Chris Waller told Sky Racing.

The eventual plan for Lean Mean Machine looks to be longer distances as he continues his prep. Nominated for the $2 million Group Caulfield Guineas (1600m) and the $5 million Ladbrokes Cox Plate (2040m), the three-year old figures as one to watch throughout the Spring.

For the likes of Graff, there’s no shame in runner-up. Jumping from barrier 13 always proved tricky for Kris Lees’ future superstar who finished just 0.8L behind Lean Mean Machine.

As far as Waller is concerned though, there’s no looking past Angland’s ride.

Tye’s been in love with him since he’s been involved with him, he rode him in a trial here one day and he said I don’t want to get on any other horse in the spring, get me on this horse, and he was right”.