Even with a proven track record at The Valley, it was still a surprise to see the veteran gelding race ahead after looking very fidgety in the gates. 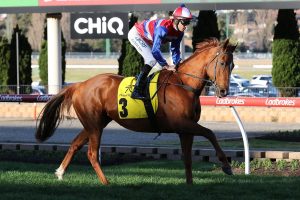 After $3.40 race favourite Night’s Watch missed the start, Magic Consul looked up to the challenge behind second-elect Hartnell in the early goings, sitting well on the speed throughout the entirety of the journey.

Come the final bend, jockey Jordan Childs took the lead, fending off a late dash challenge from Ben Melham and Homesman at the line.

For Childs, the win is just another milestone on the 22-year old’s very young, and promising resume.

“We drew well, had to use a little bit from the gate, ended up getting into the one-one” Childs told Racing.com after the race.

“He’s a horse that can really quicken up around the corner, and we use that to our advantage, we also had fitness on our side”

Having won Saturday’s Dato Stakes, Magic Consul is now primed for a run in the $5 million Ladbrokes Cox Plate (2400m) on the same Valley track on October 27, although it still seems unlikely.

Opening at early ‘thanks, but no thanks’ $101.00 odds with Ladbrokes ahead of the race, it’s impossible to see the nine-year old even placing anywhere close to Winx, but for now, the stable are simply going to enjoy Saturday’s win.

“Still got a few shivers, that’s what it’s about” Presuker told Racing.com from Morphettville on Saturday.

At such long odds, it was perhaps the most unlikely victory of the day at The Valley, especially after Hartnell moved up into first with 600m to go.

According to Presuker though, stamina was always on Magic Consul’s side.

“He’s got quite a bit of residual fitness, he ticked all the boxes for the day, so we were going in fit and we had a bit of interest in him, so beautiful” Presuker said.

As for the owners, the victory was also fairly unexpected.

“I really didn’t think a nine-year old could measure up to the Hartnell’s and the likes” Mrs B.M. Fenton said after the win.

Although the celebration is worthy, the stable will have to make a decision on the Cox Plate soon, but Presuker still seemed unsure of whether or not the race was a realistic option.

Full Ladbrokes Cox Plate odds can be seen below.