Superstar mare Winx has left her mark on the first Saturday of Spring at Royal Randwick, running first in a 1000m jump-out alongside three stablemates.

After capturing her 26th straight win during the Winx Stakes first-up a fortnight ago, Winx sat toward the very back of the three horse pack while Foxplay, The Autumn Sun and D’Argento went to work.

Once again, there was a brief moment where Winx looked beat down the famous Randwick straight. In typical Hugh Bowman style, one quick flick of the wrist saw the seven-year old bolt ahead though, letting loose with 100m to go. 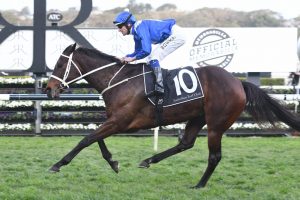 Winx (above) ran a blistering final 100m during a jump out at Randwick on Saturday.

In the lead up to what could be her fourth Cox Plate victory later in October, Saturday’s trial was nothing more than a brief workout as Winx prepares for the 1600m Group 1 Colgate Optic White Stakes on September 15.

Despite the brief milli-second of concern down the straight, Bowman still likes how she feels.

“Believe it or not, because I held her up and let her work into it like I would in a race, she just didn’t go through her gears as well” Bowman told Sky Racing after the race.

“But you could see the last 50 she was using herself superbly and really stretching for that winning post. I’m looking forward to two weeks time where we can get her ready for a race”

Looking much improved in her coat in comparison to her first-up run earlier in August, Saturday’s trial was needed to keep Winx up to scratch in between races.

The good news for fans, as well as punters, is the superstar mare looks to have made big strides in the stable, while fellow race mate The Autumn Sun also looks impressive after leading the trial early.

Likewise, trainer Chris Waller also feels good about what lies ahead in the Spring.

“I’m looking at her body language everyday and that’s so positive to me to see her wanting to do it and enjoy her job, and enjoying the people she’s around, she’s a pretty happy horse”.

While Winx now prepares for her next start in two weeks’ time, the overall outlook for the mare looks to involve the The Turnbull Stakes (2000m) on October 6th at Flemington or possibly The Craven Plate (2000m) at Randwick on Everest day.