Vega Magic to run for James Harron in The Everest 2018

Last Saturday’s Bletchingly Stakes winner Vega Magic will run for slot holder James Harron in the 2018 version of the $13m The Everest (1200m) at Randwick on October 13.

Vega Magic, above, has been secured by James Harron to run in his slot in The Everest at Randwick. Photo by Ultimate Racing Photos.

The Lindsay Park trained Vega Magic was runner up to Redzel in last year’s running of The Everest and returned to winning form with a brilliant three lengths victory in the Group 3 $150,000 The Big Screen Company Bletchingly Stakes (1200m) at Caulfield last Saturday.

Vega Magic will fill slot number ten in the twelve slots that will make up the 2018 The Everest and James Harron was happy to wait until he found the right sprinter to run in his slot.

“We have been biding our time waiting to secure a horse with the credentials to win the race and importantly, to see that they have returned in top form,” Harron told Racing NSW News Desk.

“Vega Magic was favourite for the race last year when running a great second and his return in the Bletchingly Stakes was that of a top class sprinter at the top of his game. We are delighted to secure him to run in our slot.”

Harron is looking to win The Everest for a second time after Redzel ran in his slot last year when he was able to hold off the fast finishing Vega Magic.

David Hayes, who heads the Lindsay Park Team along with son Ben Hayes and nephew Tom Dabernig, decided to put the blinkers on Vega Magic for the Bletchingly Stakes and got an instant result with the five year old working his way to the front with Damien Oliver swinging against him before the big chestnut stormed away in the straight to record a three lengths win over the Darren Weir trained Voodoo Lad.

“It was fantastic to see him back to his best,” Hayes told Racing.com.

“He is a blockbuster sprinter on his day. He made some in-form horses look ordinary. He played with them today.”

Vega Magic has firmed into $8 at Ladbrokes.com.au for The Everest and is now on the third line of betting alongside of Nature Strip behind Trapeze Artist at $5 and Redzel at $6.50.

The Gerald Ryan trained Trapeze Artist will run for Aquis while last year’s winner Redzel will fill the slot owned by Yulong Investments while the Darren Weir trained Nature Strip is still vying to fill a slot after scoring a six lengths win in the Listed $100,000 Lightning Stakes (1050m) at Morphettville last Saturday. 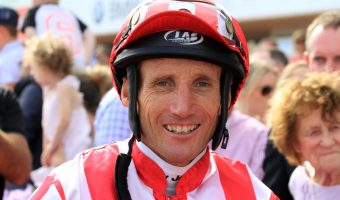