The Sydney Autumn Racing Carnival continues this afternoon for Tancred Stakes Day at Rosehill Gardens and you can stay up to date with all the results at races.com.au! 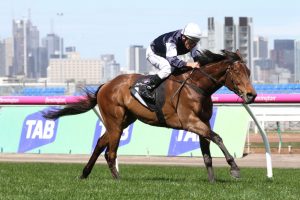 Almandin has been extremely well-backed in the 2018 Tancred Stakes betting market with Ladbrokes.

It was Gailo Chop that looked set to start the Tancred Stakes as a dominant favourite following his excellent win in the Ranvet Stakes, but there has been a stack of money for 2016 Melbourne Cup winner Almandin in the past 24 hours and there is every chance he could start the race as favourite with Ladbrokes.com.au.

There are a lot more chances in the market for the Vinery Stud Stakes and it is Chris Waller-trained Unforgotten ($4) that is currently a narrow favourite from Aloisia ($5), Alizee ($6), Bring Me Roses ($8) and Danzdanzdance ($8.50).

All but one race on Tancred Stakes Day is a black-type affair and every single contest will prove to be a strong form reference for a major event during The Championships at Royal Randwick over the next fortnight!

Irukandji took out The Schweppervesence at Rosehill Gardens this afternoon to deliver Dundeel his first black-type winner as a stallion.

Corey Brown rode Irukandji patiently in the early stages of the race and he was able to get the talented colt over from the wide barrier draw without using too much energy.

Arbeitsam will back-up in the Doncaster Mile next weekend after he recorded a tough victory in the 2018 Neville Sellwood Stakes at Royal Randwick this weekend.

Tim Clark took Arbeitsam straight to the front in the early stages of the Neville Sellwood Stakes and he was always in control of the Group 3 effort.

Maurus hit the line strongly, but he never looked like catching Arbeitsam and the Dynamic Syndications-owned galloper was able to score one of the biggest wins of his career to date.

Spright made a winning return with a fast-finishing effort at Rosehill Gardens this afternoon.

There wasn’t a great deal of pace in the early stages of the Star Kingdom Stakes as Spright was settled in the second half of the field, but she still had the turn-of-foot to finish over the top of her rivals.

Trainer Garry Frazer was delighted to see Spright return to her best form and she will have her next race start in the Hall Mark Stakes.

Prompt Response returned to winning form with a fighting victory in the 2018 Emancipation Stakes at Rosehill Gardens this afternoon.

Coolmore Classic winner Daysee Doom took up the running in the early stages of the race and jockey Damien Oliver was happy to sit just outside the lead on Prompt Response.

Prompt Response looked like a sitting duck when Dixie Blossoms and Oregon’s Day loomed on the outside, but Prompt Response was able to hang on to record a tough win.

Levendi outstayed Astoria to win the 2018 Tulloch Stakes at Rosehill Gardens this afternoon.

The Tulloch Stakes was dominated by horses right on the speed and it was Weather With You that took up the running, while Astoria and Levendi settle just behind the leaders.

Astoria hit the front at the 300 metre mark and proved very tough to run down, but Levendi got his nose in front in the shadows of the post to record the biggest win of his career to date.

Almandin finished over the top of his rivals to record a strong staying win in the 2018 Tancred Stakes at Rosehill Gardens this afternoon.

Kerrin McEvoy gave Almandin an outstanding run in transit and he stalked Gailo Chop throughout the race.

Almandin was always going to be stronger than Gailo Chop in the concluding stages and he outstayed the likes of Ambitious and a fast-finishing Who Shot Thebarman to claim the Tancred Stakes.

Almandin will press on to the Sydney Cup in a fortnight and he will be very tough to beat.

Hiyaam led from start to finish to record an impressive victory in the 2018 Vinery Stud Stakes at Rosehill Gardens this afternoon.

Michael Dee took Hiyaam straight to the front in the early stages of the Vinery Stud Stakes and that proved to be a winning play as she never looked like getting caught.

Hiyaam will now go into the Australian Oaks and there is every possible chance that she will be even better over 2400 metres.