Russian Revolution secured a second Group 1 victory with a very tough win in the 2018 Ladbrokes Oakleigh Plate at Caulfield this afternoon. 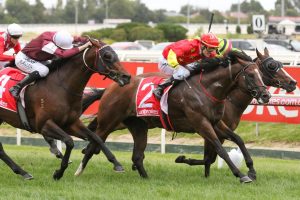 Russian Revolution was too good for his rivals in the 2018 Oakleigh Plate. Photo by: Ultimate Racing Photos

Mark Zahra was caught wide on Russian Revolution and he was forced to settle the son of Snitzel right on the speed more than four horses wide.

Russian Revolution towed himself to challenge Snitty Kitty for the lead, but took a while to run down the leader as the likes of Hellbent and Booker flashed home late.

There was no doubt that Russian Revolution was on tired legs late, but he did enough to hold-on and maintain this perfect Group 1 record.

Zahra admitted after the race that not everything went to plan on Russian Revolution in the Ladbrokes Oakleigh Plate and he was quick to pay credit to the toughness that the four-year-old showed in the final stages of the race.

“It was a big win and credit to the Snowdens,” Zahra said.

“I didn’t get a great run and I was wide and he is the sort of horse that you can’t push around.

“I had to peel out in the straight earlier than I wanted and it was a big ask considering that he was first-up.

“We were paddling late, but he did enough to win.

“This is my first Group 1 win with the Snowdens and all the credit goes to then.”

Co-trainer Paul Snowden paid credit to the fact that Zahra didn’t panic when Russian Revolution was caught wide in the early stages of the Oakleigh Plate and the emotional trainer was thrilled to combine with his mate for a Group 1 victory.

“Early on in his career he used to fall apart a little bit and run his race before he even got there,” Snowden said.

“We have done a lot of work with him behind the scenes to get him to settle.

“We thought we had him right on the day and his first-up record suggested that were right.

“He was four wide without cover the whole way and he was always going to be strong to the line because he is a horse that can run a solid 1200 metres.

“Mark didn’t panic and he waited, which was a terrific ride and it is terrific to get a Group 1 for him.

“He has been a big part of my career down here and through the Darley years he got replaced a lot of times when he could have won a Group 1.”

Team Snowden are yet to work out the exact path that Russian Revolution will follow for the rest of the 2018 Autumn Racing Carnival, but the William Reid Stakes at The Valley and the TJ Smith Stakes at Royal Randwick are both on the agenda.