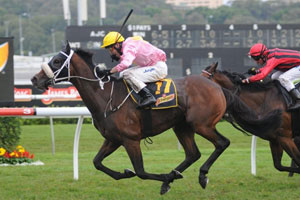 Emergency runner Stand To Gain has won the Group 1 Sydney Cup at Royal Randwick in a race marred by a nasty fall involving Hawk Island and Tinseltown.

Stand To Gain only managed to make the final field for the Sydney Cup with the scratchings of Mourayan and Montahlia this morning after the Randwick track was initially downgraded to a Heavy 8 before falling to a Heavy 10.

At the jump Stand To Gain had a terrible start, falling back almost 2 lengths behind the field. Solid Billing moved to the front and set the tempo of the race, leading past the post for the first time followed by Muir, Once Were Wild and Saint Encosta. Around he back of the course and past the 1200m mark Solid Billing had extended it’s lead to almost 7 lengths before the field closed the gap by the 650m mark.

It was at the 600m when Tinseltown and Hawk Island went down towards the tail of the field. Tinseltown’s jockey Kerrin McEvoy was knocked unconscious for a short time before regaining consciousness and being taken to St Vincent’s Hospital. Glyn Schofield, on board race favourite Hawk Island who was just starting to move through the field, suffered a suspected broken collarbone. Thankfully both horses appeared unhurt and followed the field around past the post before being caught ny the clerks of the course.

While the fall robbed the race of two quality horses just starting their runs, the Sydney Cup still produced a thrilling finish on the water logged Randwick track. Down the final straight it was C’est La Guerre who looked to be the horse to beat before superior wet track stayer Stand To Gain moved up to take the lead and win from Older Than Time, Solid Billing while C’est La Guerre may have peaked too early and finished fourth.