My Kingdom Of Fife is a true Queen’s Horse 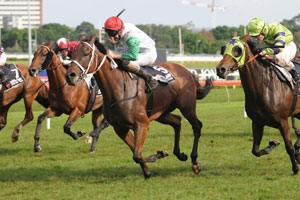 My Kingdom Of Fife wins the Queen Elizabeth Stakes

In just his second start in Australia, UK import My Kingdom Of Fife has won a Group 1 race taking the honours in the Queen Elizabeth Stakes at Randwick.

After winning as a rank outsider in the Doncaster Mile Prelude on a rain affected Randwick track last start, My Kingdom Of Fife proved to be too strong on the Heavy 10 track today over the 2,000m distance.

The fourteen horse field saw a number of scratchings including Wall Street, Buccellati and Palacio De Cristal. Emergency runner Vision And Power also did not start.

Jockey Nash Rawiller had My Kingdom Of Fife travelling midfield before sitting behind the leaders into the top of the straight. Around the turn for home it was Retrieve who took the lead before the Chris Waller trained 6 year old My Kingdom Of Fife, previously owned by The Queen, pulled clear to win from Sacred Choice and Syreon in third. Retrieve managed to finish fourth.

While Australian punters have only seen My Kingdom Of Fife in two races there is talk of the him being an ideal Cox Plate horse in the Spring.