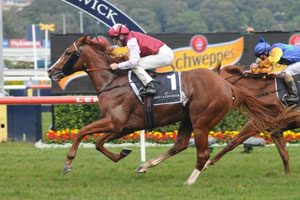 Helmet has given trainer Peter Snowden and Darley the 2-year-old Triple Crown with a dramatic win in today’s Group 1 Champagne Stakes at Royal Randwick on the last day of the Sydney Autumn Carnival.

With the track rated a Heavy 10 after rain lashed the course for a second weekend in a row, Helmet was almost his own worst enemy after reacting badly to the whip from jockey Kerrin McEvoy and shifting 5 horses wide from the rails. Luckily Helmet was far enough in front that the dramatic move did not endanger any other runners, with fast finishing Pane In The Glass marginally affected, finishing in second. There was a protest of 2nd vs 1st, but it was dismissed after the stewards ruled that Pane In The Glass would not have made up the distance if there was no move from Helmet.

The twelve horse field was cut down to 10 runners after the scratchings of Salade and Muhaajir. Fast And Sexy, who jumped well at the start, managed to grab third while Boys On Tour was fourth.

The reaction of Helmet to the whip is a concern and something that trainer Peter Snowden acknowledges as a problem to work on, stating that he has handled whip use in training before but only seems to react badly on race days.

“He just shot himself in the foot again,” Snowden said.

“We’ve just got to get that bug out of his system.”

Today marks the end of a very successful autumn carnival for Peter Snowden with his 2 year old stars taking out the juvenile Triple Crown; Sepoy winning the Golden Slipper and Helmet the AJC Sire’s Produce Stakes and now the Champagne Stakes.