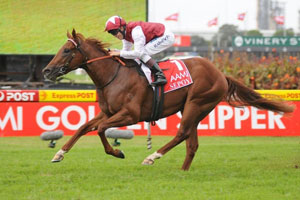 In an emotional win for trainer Peter Snowden, Sepoy asserted himself as Australia’s best two-year-old racehorse romping home to take out the richest juveniles’ race in the world, the $3.5 million Group 1 Golden Slipper (1200m) at Rosehill this afternoon.

Having dominated Golden Slipper betting all through the season, Elusive Quality colt Sepoy was an easing favourite with the punters after suffering his first and to date only defeat in the Group 2 Todman Stakes (1200m) here a fortnight ago.

The horse that got the better of Sepoy then was the Anthony Cummings-trained Smart Missile.

Tipped late to get the better of the superstar again, Smart Missile was a sensational late scratching from the Golden Slipper field.

Based on vet advice, Smart Missile and Fast And Sexy were both officially scratched at the Golden Slipper barriers at 4:08pm (AEDST).

It left 14 two-year-olda to fight it out, but the rest were running for second behind Sepoy.

Today was also the first Golden Slipper win for jockey Kerrin McEvoy who settled Sepoy into a beautiful position poised just behind the early leaders.

After jumping from barrier 12, Neville Layt’s Magic Millions winning filly Karuta Queen hit the front to lead the field up the centre of the track.

Karuta Queen held her lead up to the turn, but was quickly pushed back.

On the straight Sepoy got out into the clear and while many of the back runners moved up to challenge, Sepoy was far too good.

Racing away with 200m to go Sepoy blitzed them, bringing his A-game when it counted most to beat home Leon Corsten’s $101 roughie Mosheen in second while the John O’Shea-trained filly Elite Falls ran a game third in a sensational run from a bad gate.

Finishing off the top four in the Golden Slipper for 2010 was the Lee Freedman-trained Masthead.

He had been the dominant colt right through the season and despite a small chink in the Todman, was able to take out the big one.

“I’ve worked my whole life for this,” Snowden said after the win.

“Everyone’s got a signature race and this one is mine. This is the best feeling in my whole life.”

It was a fairytale for all involved in Sepoy including Snowden’s son Paul.

“He’s a special horse…the ultimate two-year-old and today the proof is in the pudding,” Paul Snowden said.

Sepoy took his record to five wins from six starts for prize money close to $3 million.

Having done his job, Sepoy will be sent for a spell before being bought back later in the year.