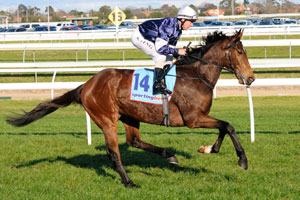 Muir has won the 2011 Adelaide Cup

Muir has displaying a strong staying performance over the 3200m Cup distance to win the 2011 Adelaide Cup and cause an upset in the feature race results today at Morphettville.

Paying $27.30 with online bookmaker Luxbet, five-year-old Galileo gelding Muir had a great start out wide in barrier 18 and ran towards the front the whole distance. Western Australian runner Big Ted set the pace for the majority of the race, leading the strung out field until the final 900m when Pergola, Muir and Guyno moved up to take over.

Around the final turn Muir surged forward while race favourite King Diamond started his run through the middle from the tail of the field. It looked like second favourite and late mail tip Macedonian was going to swamp Muir, but Muir never relented and even the strong finishing Saddlers Story could not catch him. At the line Muir won from Saddlers Story while a photo was needed for third, with Macedonian getting the nod ahead of Olympic Win.

Today’s win in Adelaide is the 6th from 22 starts for the Robert Hickmott trained Muir.