The 2011 Bow Mistress Trophy final field has attracted a capacity 15 fillies and mares plus one emergency ready to face off in the weight-for-age showdown.

Leading the entries is Lady Lynette, the six-year-old mare resuming for the season after a solid spring campaign.

First-up on Saturday, Lady Lynette has drawn ideally with barrier three and is due to be ridden by Brendon McCoull. 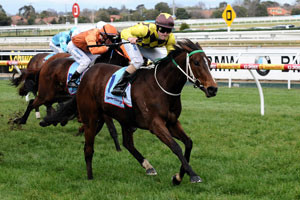 Lady Lynette’s biggest danger in the Bow Mistress Trophy is her stablemate I’m A Hussy, who has suffered a blow with a wide barrier 10 draw.

I’m A Hussy is also first up for the season, her last start being a distant 12th in the Group 2 Tristarc Stakes (1400m) at Caulfield on October 16, however showed improvement with a winning barrier trial on January 25.

David and Scott Brunton also have in-form Testa Rossa mare Testamarriage coming off a close second to Paddy’s Jubilee here on January 23 and Cool Heat running in the Bow Mistress on Saturday, both drawing well with gates one and four respectively.

The Charlie Goggin-trained Glamour Legs has been in red hot form this season, enjoying back-to-back Class wins over 1400m this month making her a nice roughie pick on Saturday.

Testa Rossa four-year-old Tan Tat Tess scored a nice win at Moonee Valley last start on January 14 and with a good barrier six draw could have the ability to score her maiden stakes victory here.

The 2011 Tasbreeders Bow Mistress Trophy is scheduled as Hobart Race 9 on Saturday, the meeting headlined by the Group 3 Tasmanian Derby (2200m) where Ludka is the favourite.

Did you know that Luxbet offer the best metropolitan horse racing odds every Saturday with their ‘best of the best markets’? Find out all about this and get the hottest price for your Bow Mistress favourite at Luxbet now!